Nearly as old as the Hellcat below this little fella has suffered less. My experiments were limited to scratch-built cannon barrels (needle + thin copper wire, using the kit fairings), radiator back and flap.

Just like the Bad Kitty the kit was a victim of my metalizing experiments and suffered several stripping procedures (one of which was the reason for the complete discoloration of the cockpit). Due to overspray (I used the UHU Tack “sausages” too sparingly) camo was removed and painted again using straight Revell 83 and 16.

To try and subdue the contrast between camo colors, and the conflict between the camo and the markings, several layers of Revell 02 matt varnish were sprayed, each of them with a few drops of grey. 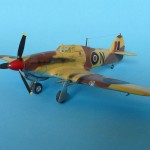 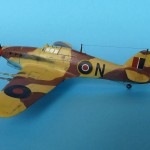 Port side. Code letter comes from an Airfix Mosquito 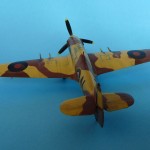 Top view – the camo is using some kind of “reversed” pattern 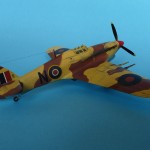 Some contrast that camo, eh? 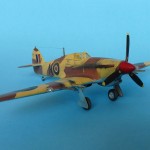 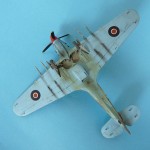