L-29 Delfin was the main jet trainer of the Warsaw pact countries for over 30 years. Since it was introduced there have been 3 kits in 1/72: Kopro, Bilek and Special Hobby, none of which did justice to this important aircraft. Luckily in 2016 Avantgarde Model Kits brought a contemporary model to the market, 3 years after their 48th scale kit was introduced. AMK’s first 1/72 release features 4 grey and 1 transparent part trees in plastic, a fret with photoetched parts, and a large decal sheet with markings for 5 different aircraft.

First – a quick look at the instructions, which are a single-sheet, double-fold affair with parts plan, color callouts and profiles, as well as 15 construction steps. 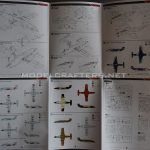 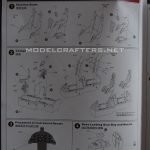 Note there are actually 6 schemes as the Czechoslovakian machine sports 2 different guises. Paints are referenced with FS codes and Gunze Sangyo/Mr Hobby numbers from the Mr Color lacquer range.

Sprue A hosts the fuselage halves and the majority of parts that fit inside them. Note the rudder is a separate piece. There are openings for the 2 curved ducts feeding air to the engine. The 2 pieces are in the upper left corner, right below the tail piece, and feature the airflow splitter seen on the real thing.

The upper nose section can be posed open or closed, there are 2 separate parts for the respective options. The nose is where the oxygen and compressed air bottles and some radio equipment reside. You can also see most of the cockpit details.

Note the one-piece cockpit tub with raised details for the side consoles. The dials on the instrument panels are recessed, the faces themselves are represented with 1-piece decal for each dashboard.  There are also raised details for the more prominent bolts and frames. The dashboard in the rear cockpit has a separate panel for the instructor  to simulate various situations for the cadet in the front cockpit. 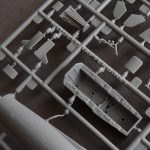 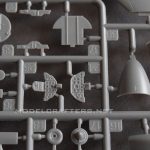 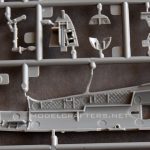 There is also quilted detail for the sidewalls. The ejector pin marks visible in these images will be hidden once the dashboards and their covers are in installed in place. The area under the rear canopy is represented as a separate part.

Other details you see are the aerodynamic brakes and the wheel gear covers with locating holes for the pins on gear legs; the openings should be hidden once the covers are in place. 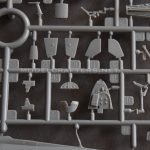 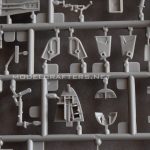 Of note is also the circular front bulkhead separating the cockpit and the nose; the nose gear leg is attached to it.

The Delfin’s jet engine is buried  in the mid-length in the fuselage, near the center of gravity. There is a turbine face, a 2-part extension tube (halves are on the 2 copies of sprue C) and the 1-piece exhaust itself. 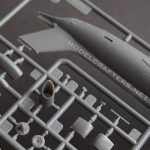 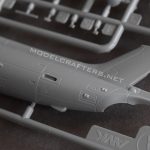 The fuselage features some really nice details. There are 3 panels that are added after the 2 halves are joined together. Being separate parts they will retain their details instead of featuring the separation line between the 2 main fuselage parts.

Sprue B holds the aerodynamic surfaces: wings, 2-section flaps and the horizontal stabilizer with 1-piece elevator (as the Delfin features a T-shaped tail). From the box the flaps are mounted in the extended position, but if you remove the pins – you can have them retracted, sitting flush with the wing.

Thanks to some clever engineering all ejector pin marks are OUTSIDE the wheel wells and will be hidden once the wing is assembled. Same applies for those in the intakes – they will be behind the separate duct pieces. 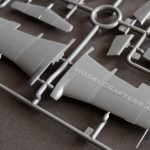 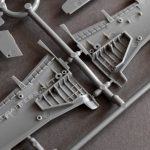 Note the high stubs with locating holes: this means you can clamp the wing without fear of it caving in while the glue is setting – kudos to AMK again. The Pitot tubes are molded integrally with the upper wing halves, something the sloppy majority of us (me included) would consider a weak point of the kit.

You can see the recesses round the gear wells that will accommodate the structure from the upper part.

All ejection pin marks are outside the wheel wells 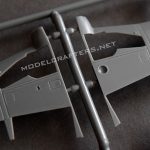 The odd channels in front of the flap slots are intended for the PE parts that simulate the wing structural ribs.

There are 2 copies of Sprue C in the kit. They contain the engine halves, external fuel tanks (with integral pylons), wheels and tires, ejection seats and a few smaller details.

The weld seams on the tanks are really prominent for the scale, and the pylon molded as part of the right half requires some careful surgery of you want to hang different stores under the wings of your Delfin. The remaining parts are very well defined, there is no flash.

The clear sprue has the windshield, both canopies, landing light, gunsight reflector (some Delfins were armed with a .50 cal machine gun) and the additional glass panel separating the 2 cockpits. 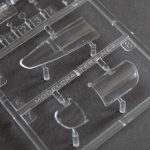 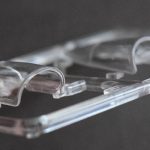 Details are transparent, molded uniformly, and the distortion is medium to small.

The decal sheet is a trademark of AMK – nearly as large as the box. The majority of real estate on it is taken by the markings of the aircraft on the box top.

The sheet includes a full set of stencils, plus markings for 5 separate machines. Colors are saturated, there is no shift on my example. 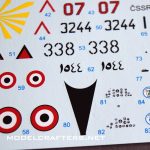 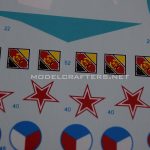 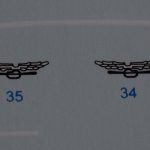 Another sharp detail from the decal sheet

The sheet looks great, with its only fault than the multiple black lines obscure the Egyptian eagle at the center of the tail marking.

This is a beautifully detailed kit, and everything it needs are some more Warsaw pact decal options before I move it to the building area.