Alright, so kits of various Pz Kpfw III “marks” have been around for quite some time, including several versions by Revell, whose releases were (and still are) regarded as the finest depictions of the tank in the scale.

As the Revell kits have gradually became less and less available, Dragon have stepped up with a new-tool Ausf. L (the subject here), M and the N infantry support tank with the 75mm gun, fitted to early marks of the Pz. IV. As you’d gather DML would milk the molds as much as it can, hence the commonality.

Let’s have a look at the parts, starting with sprue A: 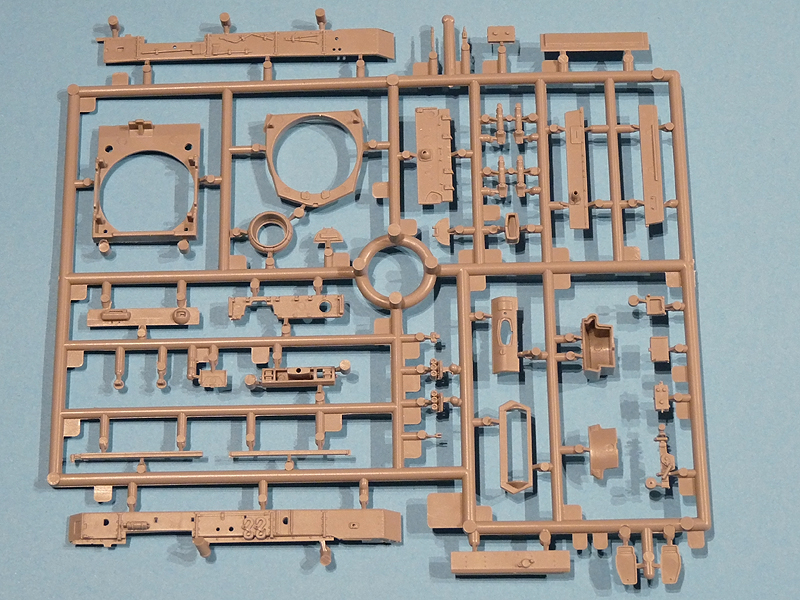 What do we have here?

– Most of the upper hull – the box under the turret, which is a multipart affair (and it’s OK, considering the inherent boxiness of the design),

– turret base, commander’s cupola (one piece, with a 2-piece hatch),

– escape hatches on either side of the hull,

– fenders with detail molded on, but no anti-skid pattern, etc.

Sprue D has all the wheels and the final drive covers. Note the return rollers are slide-molded and there are two spare roadwheels that do not have hubs:

Sprue F has the gun and some smaller details:

You can also see the turret and its add-on armor that were broken off the sprue in my example – pretty nicely detailed for such complicated shapes. Also visible is the upper hull/engine deck with molded-on intakes.

Finally – a few images of the hull tub (sprue Y), also slide-molded, and really well at that:

The shock absorbers are separate here, which is a pretty nice touch. The molded-on suspension arms may not impress most of you, but this would certainly reduce building time and make alignment less complicated.

Despite the awful photography I managed to uncover a bit of the detail on the track, which looks rather nice for the scale.

Time for some PE (grilles) and the decals.

No surprise where the PE comes from 🙂

Onto the instruction sheet: typica Dragon, with part plans, diagrams, subassemblies, and one-side view of each machine.

Overall – pretty nice and simple-looking release with uncomplicated assembly and a few simplifications – e.g. the molded-on OVM tools and towing cables, as well as closed hatches and the solid grab handles on the turret top.  Hardly anything most of us can’t handle 🙂

More about that – in the next episode.