The gun comes on two green sprues. There are two seated soldiers comprising the crew (aiming the gun in azimuth and elevation, respectively) – no loaders are present.

You can assemble the gun with or without crew. If you are using the aimers you will notice the seats are molded to their backs (all handcranks are separate details). There’s a pair of extra seats should you decide to skip the crew.

Details on the gun itself are pretti decent for a snap-fitter. The only visible ejector pin marks are on the single-detail gun carriage, but these can be quickly removed.

The seats could use some thinning, and the flash hider deserves hollowing out as it is prominent enough. The details on crewmen uniform are a bit on the soft side, especially on the front torso. 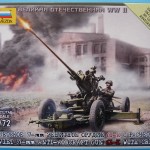 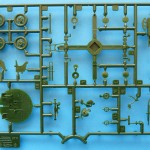 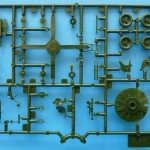 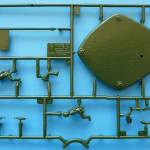 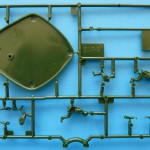