Much-smaller than it’s Soviet counterpart below, the FLAK-38 is represented by fewer parts. The crew consists of an aimer/gunner and a loader.

Details are well-represented on the gun – even bolt heads on both sides of the armored shield are represented. Please note that transport trailer and ammo boxes are not included.

The flash hider is a bit too bulky, but should be easy to replace with a self-made cooking-foil detail. My main concern is that the sprue gate that is located on the barrel is almost as thick, so care should be taken when separating that detail. It could also use some seam-line cleaning, esp. on the small shield just in front of the breech. 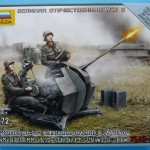 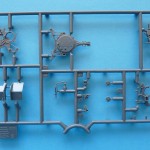 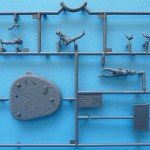 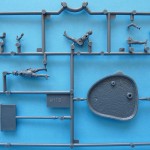