After so much waiting the new Mi-24 by Zvezda is finally in my hands. Probably one of the most awaited models in the 72nd scale, this impressive offering has no less than 284 parts and allows you to build the most accurate “Crocodile”  in the scale to date.

One of the perks you get with the kit is the complete engine/gearbox setup that allows you to build your Hind all opened up (you’d still need to make the compartment plumbing yourself or wait for Eduard’s go at it though). Pick a V version with the YakB-12,7 Gatling gun, or a GSh-23-2 armed VP. Hang some serious firepower under the wings, pop the two pilots in the cockpits and let it rip!

Let’s start with my favorite part – armament. Four blocks for S-8 unguided rockets and a pair of UPK-23-250 gunpods to boot plus fuel tanks and some more.

Zvezda has included the flare blocks that are installed on the tail boom.

Next sprue hold the entire nose section. Beyond the V/VP Zvezda has promised the VM, the P and even the veranda-nosed A version (but not the D for some reason) as well as the Mi-35M (which is already out), so they needed a separate cockpit area.

Notice the different chin turrets and the guns for the V and VP, respectively.

Oh, but you’ve noticed the cutout for the pilot door, haven’t you? Yep, you can build this Crocodile with the canopies open as well!

Evident from the pics above is noticeable drop the main rotor blades are molded with, as opposed to the HobbyBoss offering. The raised ribs on the blades are also more restrained. The exhaust heat dispensers and the flare ejectors in their either form (shrouded or not) are also a bonus in the Zvezda kit. The Russian molding also has better detailed main rotor head. 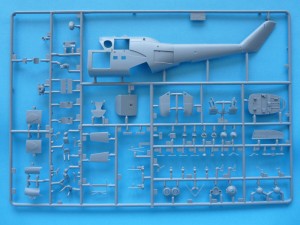 Notice the detail on the bulkheads and the inside of the fuselage half and the cutouts for the engine and gearbox area.

Transparencies in the kit aren’t something that you will be writing home about. Zvezda has them broken down into little pieces to allow for opening… and polishing, because of the visible surface imperfections.

Three machines can be built using kit decals – two V-examples from the USSR force in Afghanistan, and a VP from the Baltic fleet.

That’s pretty much it – a great model of a great aircraft. Here are the improvements over the HB kit:

– better shapes and dimensions – even the vertical stabilizer has airfoil shape;
– pilot and operator cockpits can be posed open OOB;
– engine/transmission compartment can be posed opened with what’s in the box;
– main rotor details are molded better and the blades have a sag;
– two types of flare dispensers included;
– crew included;
– overall better detailed.

In short Zvezda’s offering beats the HobbyBoss offering pretty much everywhere but in cockpit detailing – the Russians elected to represent instrument panels using decals instead of raised and engraved detail. This doesn’t mean I’m going to toss my HobbyBoss example – I’ll try to build the two side-by-side.