The “King Tiger” tiger needs no introduction, and there’s hardly a company that has not issued a kit of it. While the angles and sizes of various armor plates would rarely be the subject of scrutiny in 1/72 (and even less often are corrected on models), tracks remain an important detail of the kits.

There are several types, including multiple patterns of the wider “combat” and narrower “transport” ones – a situation similar to the first generation of Tiger tanks.

I will compare the tracks of the 3 most easily accessible kits of the production model: the Revell, Dragon and Trumpeter ones, with OKB Grigorov’s Kgs26/800/300 resin track. First – “mug shot” of the contenders.

Revell tracks are “link and length” hard plastic tracks, Dragon offers their favorite DS contraptions (that were stuck to each other when I removed them from their original plastic packaging), and the “rubber”, “can be glued with model glue” Trumpeter black tracks.

Two more shots – at a lower angle, and directly above, so you can judge the face detail by yourselves. 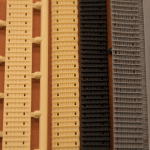 To me personally the companies using softer material  – Dragon and Trumpeter – are always on the losing side due to the properties of the medium they chose. You can see the thick borders of the square apertures/track patters on the 2 manufacturers. The Revell tracks seem a degree more delicate. However they are visually narrower than the rest of the gang.

Scaling down the actual width of 800mm shows the 1/72 track should be about 11.1mm wide, so we do not have a perfect solution.

Let’s see how track patterns compare with the real thing.

Looks like all manufacturers got the basics of the pattern, with the Trumpeter track showing the most oversized detail, followed by DML and Revell’s simplifications.

Let’s turn the tracks over and check the other side.

I wouldn’t call this an even fight because:

Note the simplified tooth profile on the Revell track, and that instead of thinner “neck” between its two edges the teeth on the Dragon track are simply cut down to an overscale effect similar to what you’d see on Leopard 2 tracks.

My personal favorite among the kit options would be the Revell track, as it’s made of quality, durable polystyrene. True, it’s fiddlier to put together, and it does have simplified details, but you know it will be in the box in the same state 10 years later and in your display case for another 30 when done.

However availability and durability is sometimes not enough, and that is when OKB aftermarket sets for King Tiger come in handy. As a result all my KTs are getting the resin treatment, which I would recommend to you as well.