Big machines have always been a thing in the USSR, and that is definitily true for both aircraft and tanks before WWII. In April 1941 some 20 proposals for a super heavy tank competed within the Kotin design bureau. War interrupted this madhouse, all guns built for the design were destroyed. However since men continue to obsess with heavy tanks that were never built in metal – what you will see below is the winning one in resin.

Georgi from OKB Grigorov has researched a number of the competing designs, and Duhov’s proposal is one of 5 (five) KV-4 variants currently available in kit form from his shop.

On to the sturdy cardboard box keeping the parts safe.

Inside you will find zip-lock bags with parts, all neatly tucked into a large sheet of bubble wrap, and the typical minimalistic instructions on a single folded sheet.

While the kit is not branded as “heavy metal” or “Hard-o-big” as e.g. the SU-122-54, this KV-4 can’t be considered not as “simplified” either. The kit fenders alone are nearly 11cm long, and with 8 road wheels per side, separate suspension arms, bump stops, return rollers and what have you, there’s still some 150 parts in the trademark grey resin.

Something I am not used to in OKG kits is the minimal number of PE parts – just 12 of them in a small shiny fret, all supports for the fenders with hex bolthead detail. Naturally – you will need to fold them 🙂

These are glued to the sides of the 1-piece upper hull, which has the driver, engine and transmission hatches molded shut. It is by far the largest and longest part in the kit.

There are openings for the main turret and the engine air intakes, which are supplied as separate parts.

There is no mesh or PE parts to cover the openings in the intakes themselves.

Next in line is the hull pan with numerous openings and locations for various parts on the sides, and positions for the tow hooks at either end.

Admittedly I have no idea what could tow the 80+ ton behemoth other than another such tank with no turret – or a “Russian troyka” of 3 turretless KV-1s, attached to a monstrous tow bar.

One-piece fenders for each side – nothing to bend here.  You are already familiar with the 6 lengths of highly detailed 700mm KV tracks.

There are 4 equipment bins that sit on top of the fenders. They are cast hollow, but closed, and are supplied as individual parts with raised hinge detail and recessed hinge line:

Nice detail on the mantlet, too: the armored bolts with conical heads are beautifully reproduced.

You’ve already noticed the turret is hollow. The large circular opening on the top is the base for a secondary turret armed with a DT machine gun. The smaller turret completely covers the ring bolt detail when installed, but you’ll know it’s there 😉

The kit includes the secondary turret with a DT machinegun, as well as open-bore resin barrels for both the 107mm and the 45mm gun. 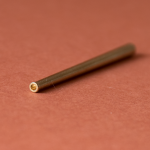 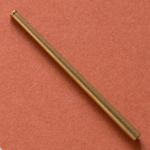 While the 1-piece resin casting already looks good enough and will require minimal cleanup due to the minimum attachment points to the casting stub,  OKB Grigorov offers a machined brass 107mm ZiS-6 gun barrel as well. The turned barrel is smooth inside and out, no visible tracks from the lathe knife’s point, and is a drop-fit replacement of the resin one. OKB has already offered several opportunities to get the metal barrel for free with your KV-4 order.

The running gear of the kit is where the bulk of the parts is. Behold:

The most numerous are (naturally) the roadwheels: 16 standard steel 2-part stamped ones with lightening holes that are also available as a separate set for a standard KV tank chassis.

The suspension arms for the roadwheels are separate parts. Note the arms are handed (different parts for left and right side of the hull), so do check the fit before gluing these in place. The circular pin obviously fits in the wheels themselves, while the square key is intended to lock the arm into position in the hull.

Of curse you can simply drill out the opening for that key and have the running gear posed.

Other than the suspension arm each roadwheel corresponds to a bump stop – an assembly that is intended to limit the travel of said arm so the tank does not lie flat on its belly. Parts are delicate and highly detailed, take a look: 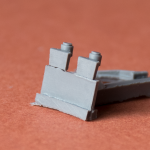 Next you have the return rollers, 4 on each side, as well as their bases that need to be glued to the hull tub first. 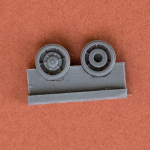 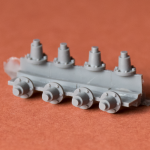 You can clearly see the bolt detail on both part types.

Sprockets – your usual large KV two-part affair with a massive center cap and a lot of bolts on the perimeter. 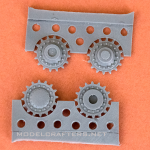 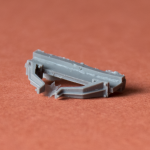 The parts on the second image are the mud scrapes – these were intended to remove the mud deposits accumulating inside the massive sprocket.

Next are the idlers, the track tension adjustment mechanisms and their bases. You can actually see the bolt thread on the tensioner parts. 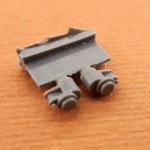 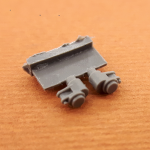 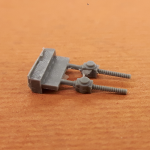 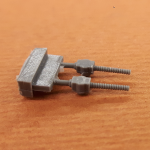 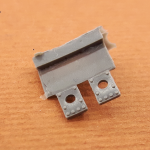 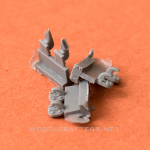 DT machninegun tips (one for the bow gunner, and another for the small turret up top), lifting hooks for the engine and transmission decks (that will need some work on their openings), transparent resin headlight.

Basically you have everything you need to build this Soviet “paper” super heavy in the box. This is an impressive, very well detailed release, and with the excellent properties of the medium OKB uses it should pose no problem for an experienced modeller to obtain an excellent result.