Alright, it’s been a while since I started this kit, and the source of the delay has been the overspray due to cracked airbrush nozzle.  While waiting for a replacement I replaced most of the detail on the top.

I removed the antiskid plates (don’t ask – don’t tell) and re-did the antislip coating only. Few of the original plastic handholds are still in use, most were replaced with wire – as were the DML PE parts, since most were too flimsy and two-dimensional. I also added the rope tie-downs at the 4 corners.

Some of the molded tow and lifting eyes were simply drilled, others were replaced with copper wire (the big ones on the bow) or with the provided PE parts (radiator intake, turret ring).

I completely cut off and replaced the front light guards with plastic scrap. The front periscopes of the vehicle commander and the gunner were molded as solid pieces – these were cut off and new guards were formed from PE fret leftovers and plastic.

The angle of front turret armor plate between the 50 cal and the Mk.19 should match that of the two “side burns”, so it was replaced with a piece of plastic, glued at the correct angle. I covered the wedges with aluminum foil.

Molded-on tools were scraped off, the big white spot there is Squadron’s white stuff, diluted with acetone and brushed on where the tools used to be. I have a pack of Attack’s resin “Implements and tools” (RE 72329) that looks like it deserves a go. The Dragon shovel (a separate part) is really good, though! 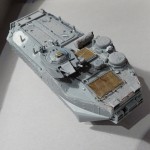 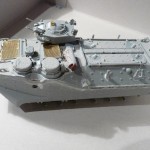 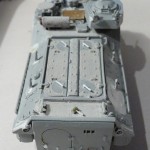 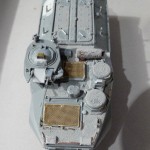 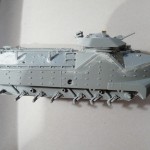