Earlier on I’ve shown you both the contents of the box and the ready model. Now let’s get a look “behind the scenes”, or how the model was actually built about 6 months ago.

Some simple statistics. There are over 1200 parts in the box, yet in the 14 constructions steps only about 600 are used.I’ll just go over the tricky moments in each step.

Steps 1 and 2 is about assembling the wheels and the rear hull plate and adding a bunch of details to the latter.

– build the exhausts, but set them aside to paint and weather them later. They will fit if you keep the attachment points clean;

– idler supports – parts might look alike, but are handed, so watch their numbers;

– return rollers – delicate and prone to damage – separate from sprue with care;

– roadwheels – mold line down the rubber bandage + hubcaps are a little loose and require careful centering.

Step 3 – take note of the handed parts for the frontal towing attachments. The rest is easy.

Step 4 – parts A10 (the rubber dampers in the bogey bump stops) all have a vertical mold parting line on the outside that requires cleanup.

– I would recommend assembling parts A48 and A21/A55 before adding them to the respective housings.

– the fit between the mounting pins of the housings (A38 and A39) and the holes in suspension arms (A21/55) allows for posing each bogie at a different (albeit limited) angle.

– If you want your roadwheels straight and level – use a slow setting glue and a flat surface to align them properly.

– Depending on how much slack you want on your machine – you can adjust the position of the idler mount.

– the hinges for the brake drum covers (both parts are labeled A4) account for fitting troubles. I cut the hinges from the upper glacis (part B6) with a PE saw from Hauler, glued the covers in place, then added the hinges back.

Step 6 – glue parts MA7 and MA8 to hide the lack of detail in the engine bay.

– DO NOT cut up the fenders for a late machine – they used the angular style.

– DO NOT cut off the Schurzen supports as per the instructions. You should only remove two L-shaped supports next to the two wrenches on part K3.

– in subassembly H of this step (the left-hand fender) Dragon has mislabeled a part – the retaining spring of the front mud flap is A29 (identical to the one on the right side), NOT A49 as per instructions.

To make mounting of the fenders simpler leave the tools OFF until fenders are glued in position. All the little parts act as stiffeners and that will make it harder for you. The fenders actually click into place and only need some liquid glued to be set permanently in position.

Step 8 – mounting the fenders, tracks and the engine deck.

– I left the tracks for later to paint and weather the hull separately.

– Adjust track slack by using a number of tracks (there are 98 tracks per side on my model) and idler arm positioning.

My recommendation: test-fit and pre-assemble the recoil guard (parts F19, F21 and F22). Add it to the gun assembly it after you attach the gun mount and the casemate to the chassis. The gun is a VERY tight fit when inserting into the casemate and you may have the shield bend or break off on you.

– leave the spare wheels off until after you paint the model.

– use 0,4mm or smaller drill bit to open locating holes for the rain guard (part K5) on the front left of the casemate (marks on inside of part D1.

– refer to the supplement instruction sheet for the front armor and:

– part K36 is a late pattern additional ballistic protection for the commander’s cupola. It’s not mentioned in the instructions, but you will need to remove a bolt head on the edge of the roof in order to fit the part (as was the case on the actual vehicle).

Parts P5 and P6 represent the loader’s hatch – considering the lack of detail inside the casemate this is closed on my model.

Ditch part MA31  – typical DML flimsy PE that helps nothing on the model.

Part TG1 simulates the close-quarter infantry defense mortar. You can actually assemble the weapon “in action” as the parts are present in the sprue – it’s your call.

– on the MG station – add all the parts (P13, P17, P18) to the station base (P12) before gluing the shield (part P15). I replaced the buttstock of the MG-34 with the stub spring cover (part P17) as per instructions. Regrettably there is no ammunition supplied – neither ammo belts, nor the characteristic drum – which is a pity.

So far I’ve worked on the following subassemblies:

I painted the gun assembly (yellow on the visible exterior and white on the interior portion) before maneuvering it into the upper casemate. Then these two were glued to the hull with slow-setting glue. I got two gaps, obvious enough to require the use of some Vallejo putty:

– between the upper glacis and the driver’s “dog house”;

– the line where the fender and the right sidewall of the casemate meet, due to the latter being slightly concave inward.

Superstructure roof was installed next, then part C12 was cemented in place. The complete vehicle hull was now camouflaged using Vallejo Dunkelgelb, Gunze H405 and 406 for the Dark Yellow, Dark Green and Chocolate Brown, respectively. To tone down the contrast I sprayed thinned Dunkelgelb and White all over the hull.

All the wheels received  the base color before mounting them. The rubber bandages were simulated using Tamiya X-1 Black (Revell 78 for the spares – gives them a bit of dusty, faded appearance). I then used acrylic gel mixed with dark brown paints to create “the mud” on the hull and wheels.

Each track was assembled as a single run of 98 links, primed, and sprayed Model Master Gun Metal. I treated the ridges to a drybrush with Tamiya X-11 Chrome, and mounted the tracks as I would a regular DS run (they were surprisingly flexible) before adding the DIY mud to them, too.

I didn’t quite like the molded-on clasps on the tools, as separating the colors of the camo and the tools themselves is a rather tedious job (for me anyway).

I replaced the exhaust stacks’ molded-on weld seams with stretched sprue and basecoated them with Revell Rust (83). They were next treated with chalk pastels and flatcoated. The edges are sprayed Alclad II Engine Manifold to simulate smoke and residue.

Step 14 – the Schurzen. The stuff these are made from is super-glue resistant it seems. I used pieces of the “fret” to space the two layers in the middle panels. The boltheads on the edges of sprue M were glued over the holes in the shields.

The Schurzen supports are a pain to mount really. Despite markings on the hull they simply don’t fit as per instructions and I had to move supports and cut some of the fender frames so everything is close to the real machine. 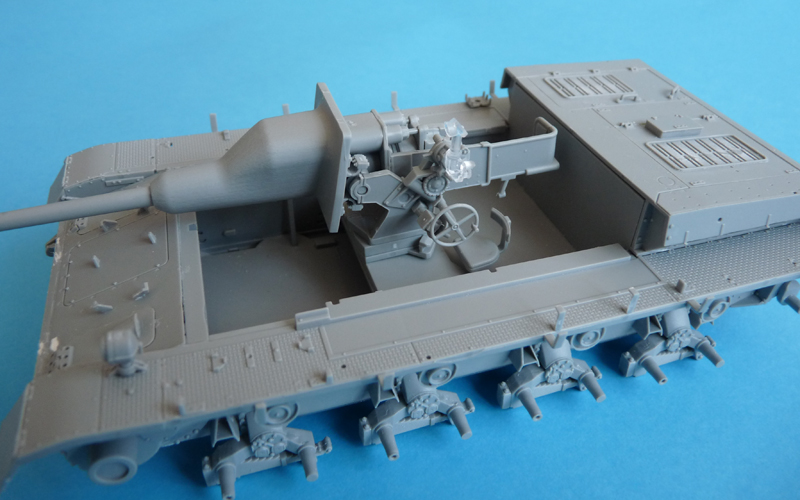 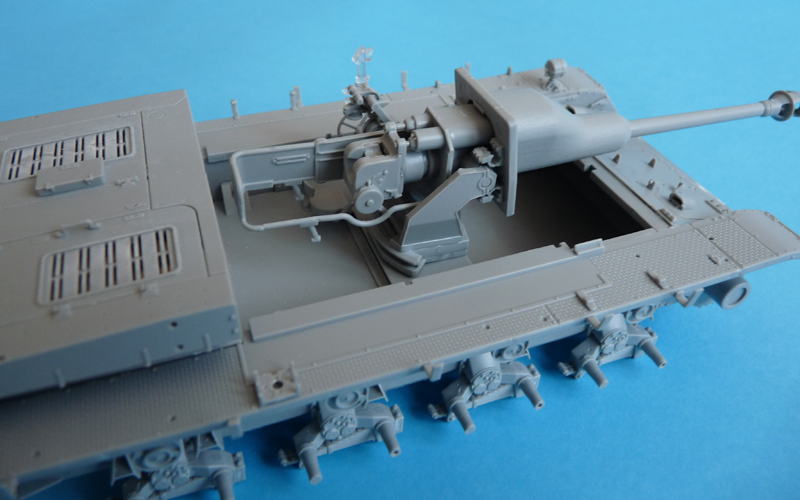 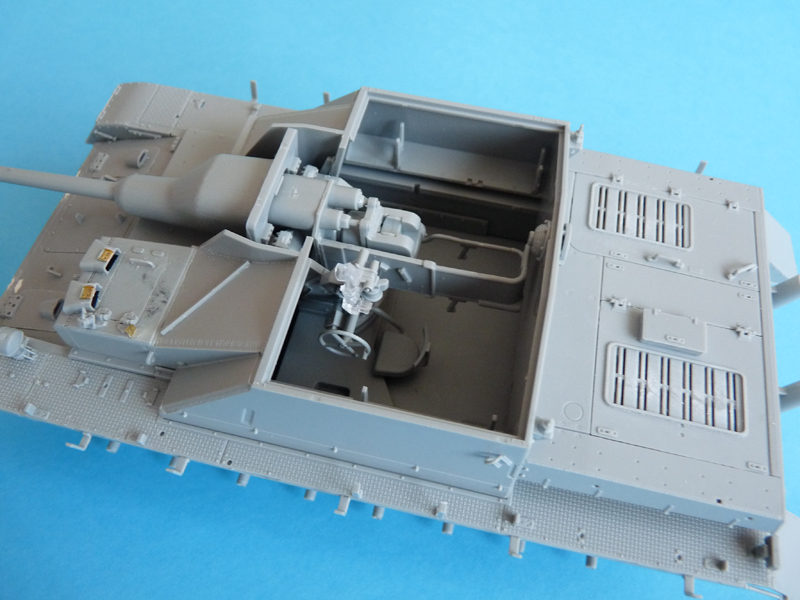 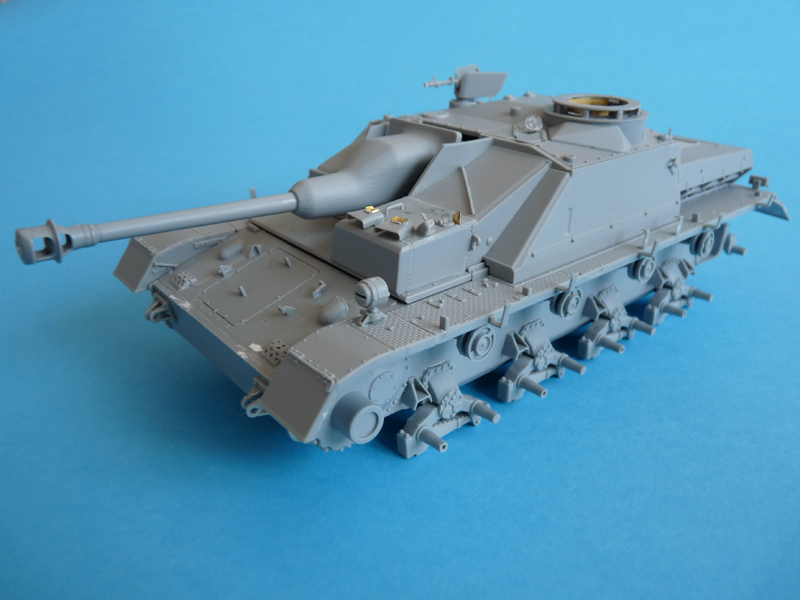 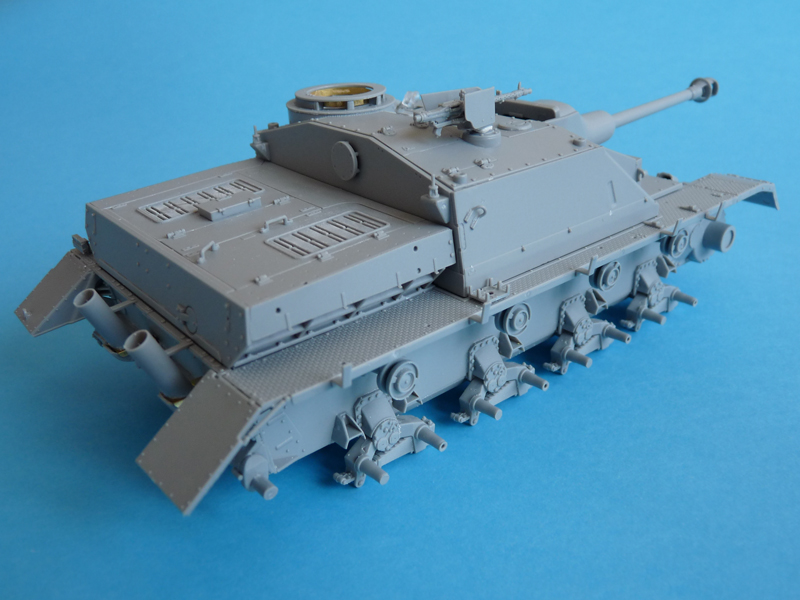 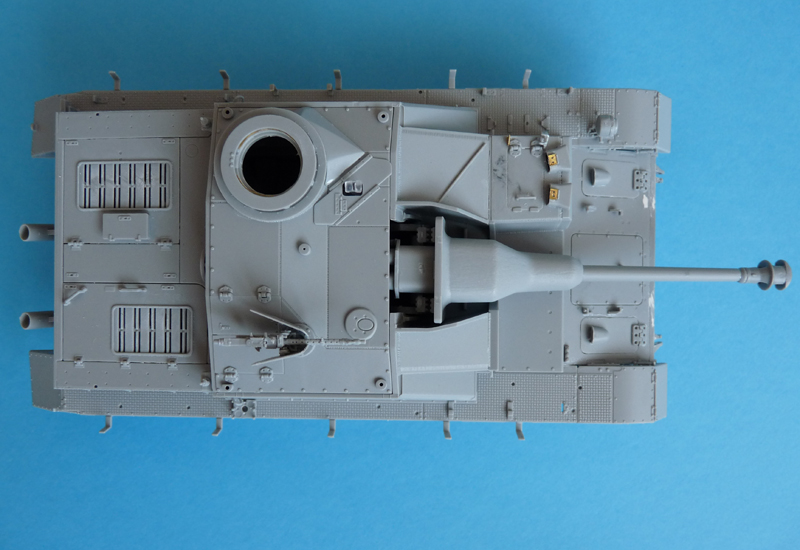 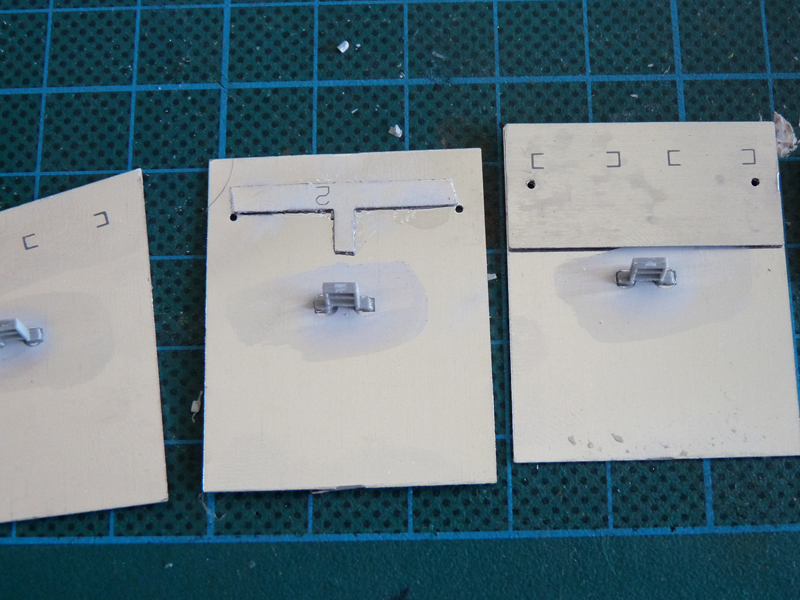 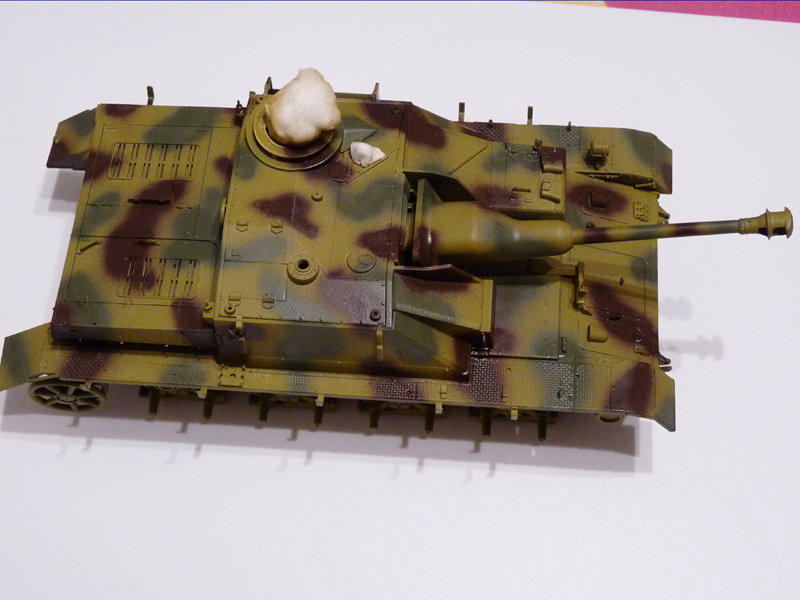 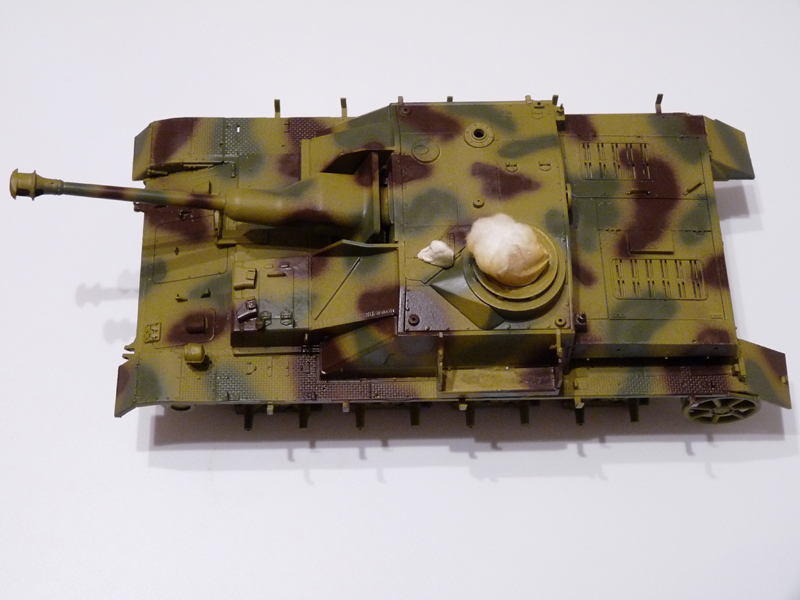 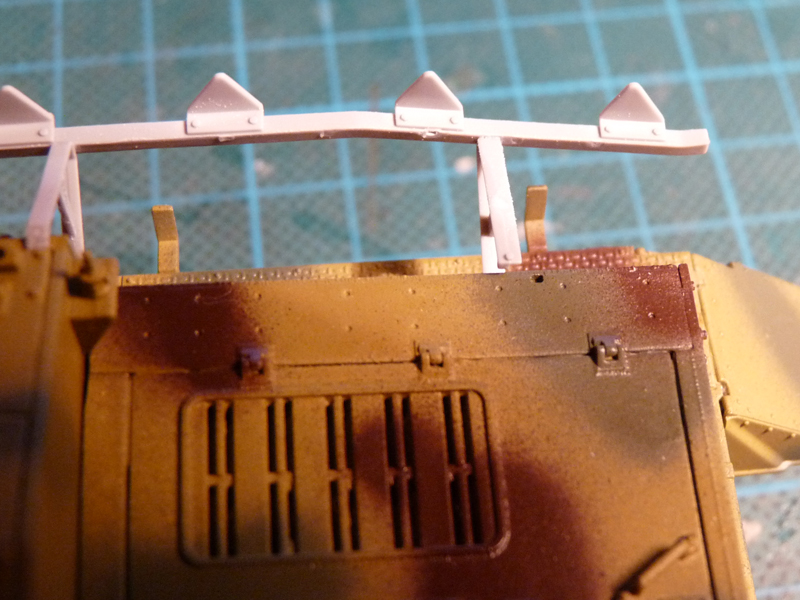 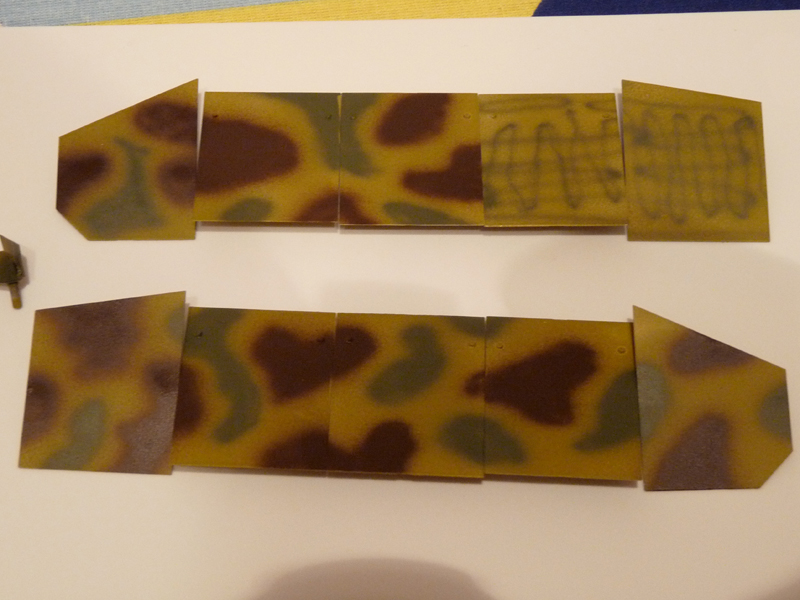