Previous Zvezda kits in the scale had sprues on their own inside the box. That made each sound like a baby’s rattle. Parts here are sealed in a soft plastic bag, which prevents parts loss, and makes plastic less prone to breaks.

The ISU-152 is big, grey and bad@$$, and at first sight appears to have a very small amount of parts in common with the IS-2 kit from the past year (which is a very good one if I may say).  That’s sort of misleading because there is still a lot from the IS-2 – the sprues are simply re-done and parts are re-arranged for the new machine.

Let’s start with the common parts. First up: the tracks.

We already know how they look like, and that they are the proper late-war variant that was common to SPGs of 1944 production. We also know that the guide teeth are too sharp and pointed, and perhaps a bit lower than they have to be.

For comparison see this image of (quite possibly) a post-war example with guide teeth on all tracks and 10-bolt covers.

Then there’s the familiar hull tub – or is it? It took me 2 days to notice that the seemingly identical hull now features the ammo loading hatch over wheel station 3 on the left side (seen on the image below) – kudos to Zvezda!

I’ve only ever seen fixes done in 48th and 32nd scale aviation models. I am beginning to like these Zvezda guys even more now 😉

Sprue A (named so for convenience by yours truly) holds the one-piece upper hull and armored superstructure. The large casemate is based on the one from SU-152. Because the IS-2 hull is visibly shallower than the KV one – the superstructure on the ISU is much higher on the ISU.

The wheels and suspension arms on the sprue are taken directly from the IS-2 kit, as is the engine deck, apparently.

The protrusion you notice at the front of the superstructure roof is supporting the gun pivoting “mechanism” and allows you to traverse the gun horizontally on your kit. To the left of the upper hull you can see the rear wall with the crew entry door molded shut. There is an armored protrusion for one of the fans to the right of the hinge of said door. The gun barrel is one-piece affair with solid muzzle brake and notable seam on either sides. The recessed detail on the muzzle brake still makes the barrel eligible for replacement with the RB turned barrel.  At about 3 Euro a piece the metal parts are a drop-fit upgrade that will instantly upgrade the looks of your Braille scale Zveroboy.

There are also 4 lifting hooks for the gun mantlet. The parts for the mantlet itself are smooth, with no casting texture. That can be added by either

– stippling Mr. Surfaces 500 or other filler,

– or brushing “hot” glue over the plastic, let it soften the parts for a few seconds, and then use metal-bristle brush to add the effect.

The hinge details and the supports for the front fenders are visible on the image above. Both hatches on the roof are closed , and the Mk. IV-inspired tank periscopes appear a bit low and soft-edged to me.  The hinge details on the hatches themselves are good good enough for the scale. They also feature weld seams where appropriate.

At the back there are still the see-through louvers over the engine. It is my opinion that the locating holes are much too big, though if you come to think of this kit as a snap-together then they are fairly good.

The initial interpretations of the box art spoke of bolt-on mantlet as on the first prototype, but the kit part is correct for the production model. The cutout for the driver’s visor is present, too. The top cover will apparently be hinged to allow the gun to elevate and depress together with it.

Some bolt detail up top, the hinged cover fits in the slot in front of that area.

Rear casemate wall – note delicate handhold. Also directly from the IS-2 kit we have the spare tracks for the lower glacis.

The mantlet hooks + other details.

Sprue B – notice the connector plate for upper and lower halves and TWO pre-shaped towing cables (yay!).  Wheels, mud scrapers, hooks, hand rails, fuel drums and the DShK fill up the rest of the sprue – most of them you are familiar with from the IS-2 kit.

Notice the asymmetric opening at the top of the connector plate – this is where the lower pivoting point of the horizontal traverse will fit in. The two halves of the elevation/traverse assembly are to the right of the plate, below the tow cable. 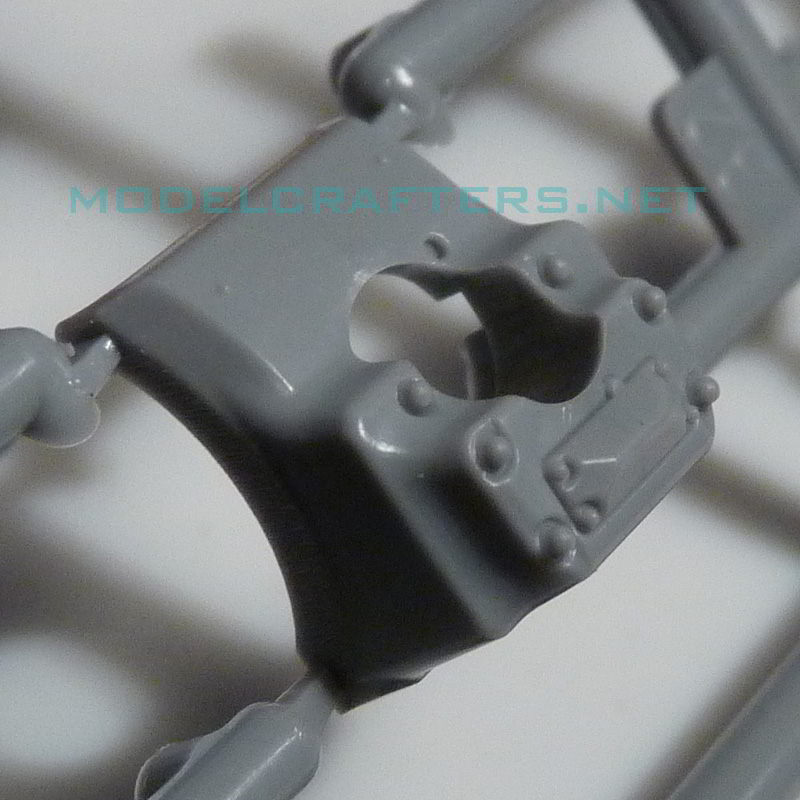 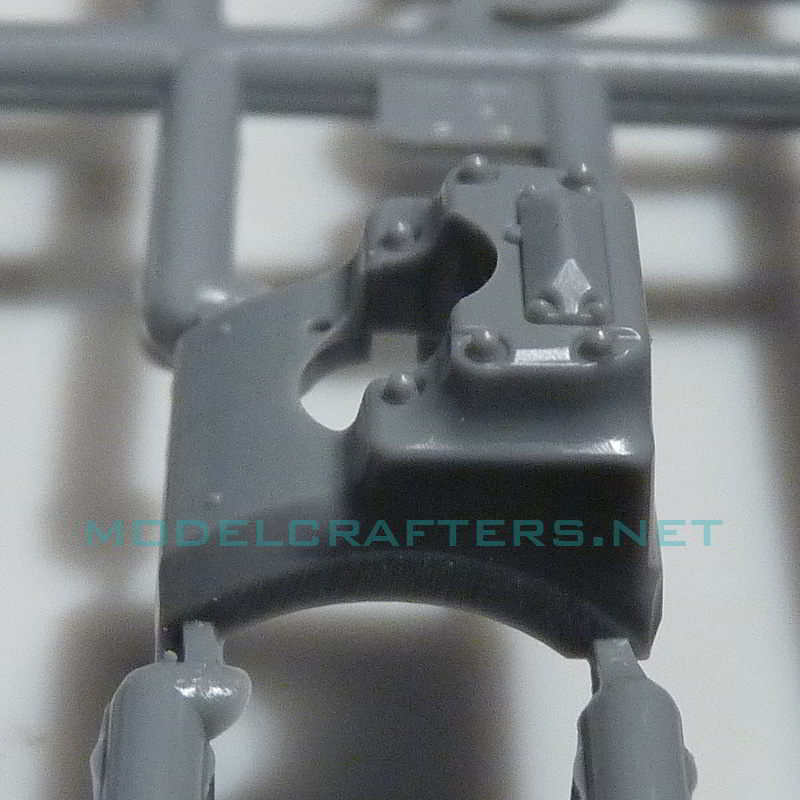 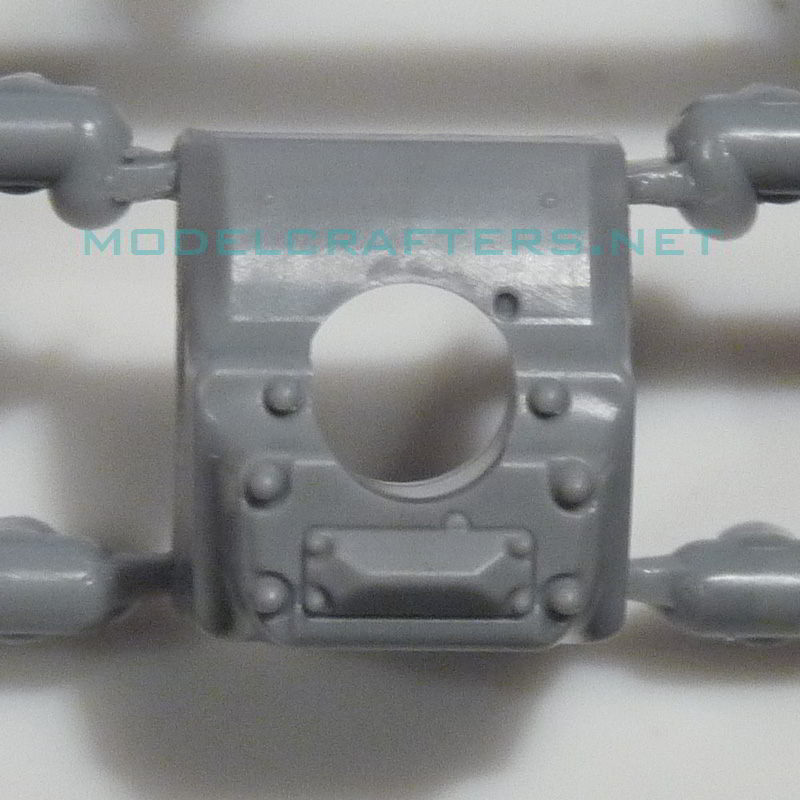 DShK and the omnipresent army shovel.

I must admit I like the way Zvezda has made this kit. Yes – there are large openings that will probably need filling.

Yes, there are places where you will need to add texture.

Yes, gun needs replacing (badly), but you have the barrel for the Italeri kit anyway. (or will simply buy one more).

Yes, there are problems with the track guide teeth, and plastic track is hard to bend even with the grooves.

Yes – the mesh screens on the engine deck will still be better off replaced with PE.

And it’s still too good to pass on 🙂