OK, after showing what’s in the box let’s see how to build this beast of a kit.

First, I glued together the hull halves and added the main fenders. They are way too thick for the scale and after being measured were chopped off. 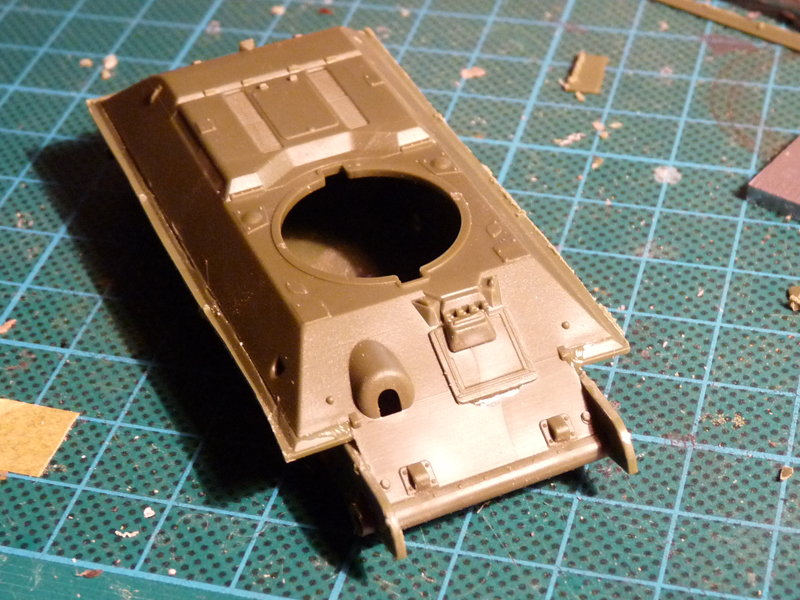 Next step – fill the trenches where the former fenders join the upper hull, and sand the sides down until they are smooth.

Details will have to be restored…

Fabricate the new fenders from scrap metal – here 0,1mm brass sheet cut to size and bent. The bend is sort of uneven, which is fine considering this is a tank.

The turret, ah the turret as the Russians say “is a different song”.  It’s split VERTICALLY, with the roof and the main hatch being separate pieces. What this results in are two prominent sinkholes on either side of the gun trunnion, a 1mm step at the top of the turret, and a bad seam at the back end. Off with Mr. Dissolved Putty.

As you can notice there is a nasty trench around the perimeter I cut using a circular saw. Its purpose (once cleaned up) is to accept some stretched sprue to simulate the weld used to add the flat roof piece to the otherwise cast cupola. I would later go on to cut off the armored fan cover, glue a plastic disc and re-glue the cover on top of it to simulate the “mushroom” side view of said cover. The armor for the sight was replaced with a piece of brass tube.

The wheels are pathetic. Not only is the disc detail very soft, the rubber-like material for the bandages is known for its ability to melt plastic. Wheels were therefore replaced with OKB Grigorov’s set, eloquently named named  Wheels for T-34,10 bolts, early production with reinforcement ring, bandage with pattern and 42 holes cat. no. S72011. A sample wheel can be seen below coated with Mr. Surfacer 1200:

The wheels are finely detailed, the correct diameter and correct shape. All you need to do is drill the wheels so the thinner UM axles fit snugly in the wheels.

Since the track run in the kit appears to be from a later period, and too thick, I picked up another resin set from OKB: the  Tracks for T-34 mod.1940, third variant, coded S72008.

Very fine detail, scale thickness, strong and flexible enough to allow me to shape them over the wheels, glue and paint them separately, then simply slip them on the model.

Some details on the hull:

– Stretched sprue from Zvezda’s Panther, softened with Humbrol Liquid Poly, and poked with a hypodermic needle.

– Same treatment around the MG position in the upper front glacis. Also added were two armored plugs for the electrical wires to the front lights.

– Thin strip of Tamiya tape was added and covered in superglue to simulate the mounting flange of the gun mask (seen in yellow below).

– Stretched sprue simulates the mounting bolts for the mask.

– The stock PE mesh over the radiator was removed; only the frame was left. The mesh was simulated with coffee filter mesh.

– Two radiator cover locking clasps were simulated with thin plastic sheet (they were lost during the hull sanding).

– Two toolboxes for the left fender were built from scrap plastic.

– A shovel was shaped from a piece of brass and given a stretched sprue handle.

– The handles of the saw were improved with pieces of network cable insulation.

– The gear-retaining hoops were made from thin copper wire.

Then the whole thing was giver a primer coat and a number of greens followed:

I then glued the painted wheels and tracks, and formed the front and rear fenders out of a Aluminum baking dish. Next the whole model was weathered and a couple of details were added – stay tuned.